The congregation I serve, Trinity Lutheran Church, spent May lifting up ministry in daily life. Preparations for that emphasis led to an invitation to Micron Technologies, an important business/institution here in The Treasure Valley.

I met them at Building 37

Three Trinity Lutheran members work at Micron and two of them, Melinda and Larry, have been there for over twenty years.

Andrew, Larry, Me, and Melinda

It was fascinating to hear Melinda and Larry’s stories of working first in production and then transitioning into new positions as automation took over. Melinda is now in IT, dealing with Micron’s overseas finances. Larry writes instructional documents, with a whole team, which are translated and used in Micron’s factories across the globe. Andrew is an engineer. At its largest, there were about 20,000 employees at the Boise Micron campus. Now there are about 3,500. That is a huge drop but it is still a lot of people. In addition to seeing the places where people work, I saw the cafeterias and gyms where employees eat and recreate.

What does it mean to be Living  Lutheran at Micron? It looks like using the gifts God’s given you to the best of your abilities. It means treating co-workers with respect. It means hiring the best people for the job. It means creating opportunities for kids who might not think about becoming engineers (because of family history, gender, socio-economic background) to come to the Micron campus for summer programs. It means greeting people by name in the many hallways.

Thanks Melinda, Larry, and Andrew for a great tour. 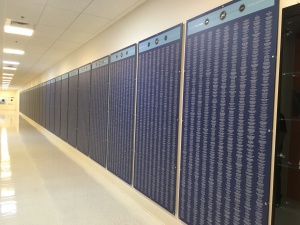 This entry was posted in Reflections, Trinity Lutheran. Bookmark the permalink.

1 Response to Living Lutheran at Micron