For 20 years,  when you walked out of Trinity Lutheran Church and looked across the parking lot you saw a tall wooden fence.  That changed this winter.   In the mid-90s, Mercy Housing approached Trinity and asked if they could lease the land around our parking lot for a dollar a year and build 16 low-income houses, appropriately named New Hope.  The proposal and final agreement were surrounded by controversy, summed up in the initials TLC no longer standing for Trinity Lutheran Church but That Lutheran Church.  Neighbors and a number of Trinity members did not want those people (people who qualified for low-income housing) in their backyard.  We are now in the middle of the 50-year lease agreement.  The fence sat on the leased land and was put up for good reasons—privacy for the residents, safety for children (the backyards back right up against our parking lot), and to block the view of the backyards from church members and people driving down Midland or Lone Star.

I had little experiences with these high solid fences before serving as pastor of Trinity and, about six months after I moved to Nampa, purchasing a house in a subdivision which requires fences between neighbors.   I do remember several fencing phone calls each year growing up in the Black Hills.  Our family’s land is surrounded on three sides by Black Hills National Forest (BHNF) which cattle graze on every summer, their owners moving them from one unit to another into October.  I never listened in on a phone call; I only heard some mild profanity and a pronouncement that part of our fence, used to keep horses in and cattle out, was down.

In the last 10 years more barbed wire fences have gone up in the Hills.  If you look at a BHNF map you will see a page of green with white lines for roads, towns—Hill City, Hot Springs, my hometown of Custer, brown squares for places like my parents’.   You will also see brown specks representing tiny inlets.  We walked, rode horses, and drove cattle through them for years.  Now they are slowly being bought up and developed, some even hold mansions, and many have tall electric fences obviously meant to keep out both livestock and people.  There are no walk-throughs for people and it’s unsettling to come upon one of these barriers and realize we are not welcome.

During the past 20 years, sections of the New Hope fence occasionally toppled over.  The church secretary would make a phone call and the managers would send someone to put the fence back up.  One Sunday morning this past winter we listened as the wind rattled the roof of our sanctuary.  This was more than a strong wind.  After worship people rushed out to the parking lot and saw that several New Hope roofs had been seriously damaged and four large sections of the fence had blown over, a few landing on vehicles.  This would require more than a quick trip to repair.  Mercy Housing’s management company decided to tear down the whole fence.  Then the questions came, when will they replace it and what will it look like.  The ground was frozen so Mercy Housing and Trinity waited for spring.  Gradually we began to hear fewer questions and more comments, comments about how nice and open the landscape looked and how well kept the backyards were.  A few months ago I followed up again with the management company and was told there were no plans to replace the fence. 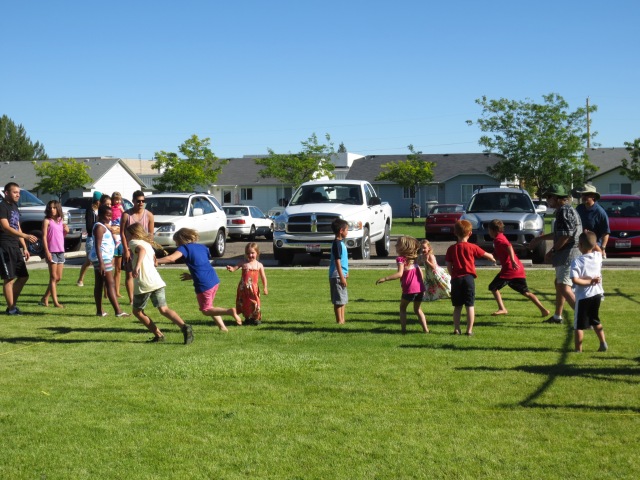 About a month ago a new conversation began—to what kind of event could we invite the New Hope residents?  There had to be food.  Who doesn’t want to eat at a potluck, there is something for everyone, and is there a better way to get to know someone than sharing a meal around a table? We had set a date for our annual picnic with Good News Community Church, a worshiping community that rents space from us.  Could we expand the picnic and invite the neighbors?  The minister of Good News was enthusiastic.  One of the mega-churches in town rents a bouncy house for its big block picnic, is that something we could do?  Look into it.  Could someone canvas the neighborhood?  Absolutely. 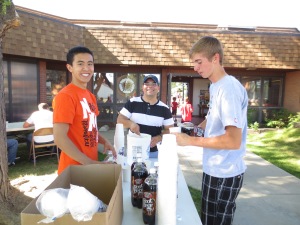 On the sweltering hot evening of the event, someone asked if we could move the tables and chairs off of the totally exposed cement patio we try to use whenever possible and into the blessed shade on the other side of building, the side facing New Hope.  Why had we never thought of that before?  Well, last June the residents would have had to walk all the way around the block to join us.  Now, all they had to do was walk across their backyards.  A bouncy house, some shade, lots of food, and a broken fence led to a grace filled evening.

Like the speaker in Robert Frost’s poem, we have come to believe that not all broken fences/walls need to be fixed.  In fact, not mending fences can lead to a wonderful transformation of space and community.

Something there is that doesn’t love a wall,
That sends the frozen-ground-swell under it,
And spills the upper boulders in the sun,
And makes gaps even two can pass abreast.
The work of hunters is another thing:
I have come after them and made repair
Where they have left not one stone on a stone,
But they would have the rabbit out of hiding,
To please the yelping dogs. The gaps I mean,
No one has seen them made or heard them made,
But at spring mending-time we find them there.
I let my neighbor know beyond the hill;
And on a day we meet to walk the line
And set the wall between us once again.
We keep the wall between us as we go.
To each the boulders that have fallen to each.
And some are loaves and some so nearly balls
We have to use a spell to make them balance:
‘Stay where you are until our backs are turned!’
We wear our fingers rough with handling them.
Oh, just another kind of out-door game,
One on a side. It comes to little more:
There where it is we do not need the wall:
He is all pine and I am apple orchard.
My apple trees will never get across
And eat the cones under his pines, I tell him.
He only says, ‘Good fences make good neighbors’.
Spring is the mischief in me, and I wonder
If I could put a notion in his head:
‘Why do they make good neighbors? Isn’t it
Where there are cows?
But here there are no cows.
Before I built a wall I’d ask to know
What I was walling in or walling out,
And to whom I was like to give offence.
Something there is that doesn’t love a wall,
That wants it down.’ I could say ‘Elves’ to him,
But it’s not elves exactly, and I’d rather
He said it for himself. I see him there
Bringing a stone grasped firmly by the top
In each hand, like an old-stone savage armed.
He moves in darkness as it seems to me~
Not of woods only and the shade of trees.
He will not go behind his father’s saying,
And he likes having thought of it so well
He says again, “Good fences make good neighbors.”

This entry was posted in Reflections, Trinity Lutheran. Bookmark the permalink.

3 Responses to Fences and Food