Our reflections about the Gathering 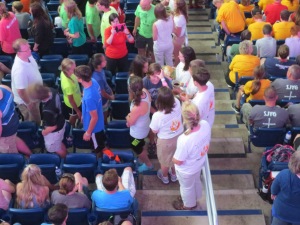 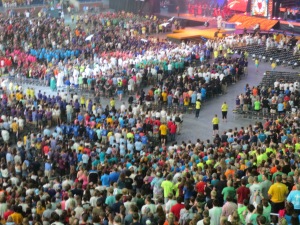 The Gathering ended Sunday morning with worship. ELCA Bishop Elizabeth Eaton preached and presided over Holy Communion. We learned that the 2018 Gathering will be in Houston, TX. Not surprisingly, almost every seat on our flight from Detroit to Seattle was filled by Gathering participants and it should be noted that it was a very quiet 4+ hours. We ate dinner in the Seattle airport and then reflected together on the entire Gathering experience. Each of the youth was asked to share three of the most meaningful pieces of our time together. What follows are the notes from our conversation:

The Christian rock band Skillet – “I just liked it”

Speaker Pastor Steve Jerbi – He wasn’t just giving a speech. He was PREACHING the good news.

Speaker Mikka McCracken – She is very passionate about one thing: eliminating food insecurity – she encouraged us to not give up and to be passionate; and she also came to the interaction center’s Walk for Water display and cheered people on as they carried water

Exploring Detroit – We were welcomed into the city without any trouble

Interacting with a local chess player in the outdoor pavilion

From the leaders (Ken and Meggan):
We agree that this gathering will definitely go down in the positive category. This is in no small part due to the quality of the young people in our group. As we sat in the Seattle airport and invited the youth to share three meaningful experiences from the trip it was evident to us that they were in fact touched by the many speakers and activities we were able to experience and they too enjoyed one another’s company immensely. Thanks to the parents for sending your children to the Gathering and to the parishioners of our two congregations for supporting us.

Boarding the plane in Seattle

This entry was posted in Youth Gathering. Bookmark the permalink.