What a day! We boarded our shuttle at 7 am, as usual, and thankfully had an uneventful trip to Hart Plaza for our Justice Day launch. It was raining. It continued to rain. 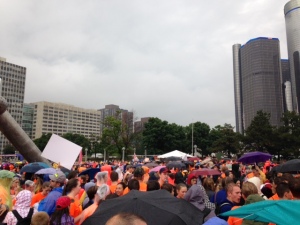 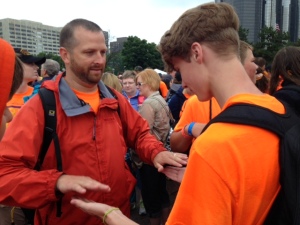 The bus departures took longer than planned but fortunately we were in the early launch group (A instead of B) and the drive to our site took only fifteen minutes. Also on our bus were Lutherans from Pennsylvania and North Carolina.  We went to Genesis Lutheran Church which houses the nonprofit Genesis Hope. It stopped raining!  A small group built a compost bin and the rest of us cleaned Genesis Hope’s community garden. We worked alongside summer interns. 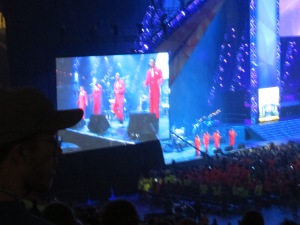 The mass gathering tonight was fabulous. During our Final 15 tonight almost every speaker was affirmed by one or more of the youth.  And before our final presenter spoke, Motown Experience led us through a medley of greatest Motown hits. Imagine 30,000 Lutheran youth and adults on their feet clapping, dancing, and singing along. Wow!

This entry was posted in Youth Gathering. Bookmark the permalink.